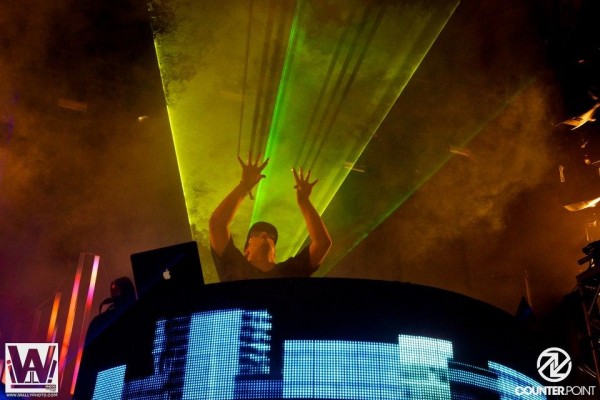 From the front row of BassLights at Hampton Coliseum in December, you could not miss a
thing. The festival featured Bassnectar, Pretty Lights, Griz, Big Gigantic, A-Trak and Gramatik.
The festival itself reminded attendees of the psychedelic movement of the 1960s.

When looking back from the front row, you may be amazed at the 10,000 people that packed
the coliseum, but even more amazed at all the color in the air. Within those 10,000 people, many
held fan-made banners and flags containing wide arrays of colors and patterns.

Some attendees chose to stand in the open, so that would be able to swing glow sticks, which
is a recreation known as “poi.” Like many of the concerts and festivals from the 1960s, the
concert was crawling with devoted fans that attend such concerts to rage and show support for
these artists. This was apparent in most of the dilated eyes within the crowd.

Bassnectar and Pretty Lights headlined the event at Hampton Coliseum, performing both
nights of the festival. The other four DJs served as the supporting act, but every performance
seemed to deserve the title of headliner.

To start the festival off, Griz took the stage and did not disappoint. From the beginning, this
Michigan-based DJ kept the crowd moving, dropping hits from “Mad Liberation” and even
sampling The Champs’ 1958 song, “Tequila.”

After leaving the stage, Big Gigantic took over. Big Gigantic incorporates lives drums, as
well as saxophone into their music. After finishing their first song, it became apparent that Big
Gigantic is the electronic equivalent to a rock ‘n’ roll jam band.

It is quite obvious that the trappings of this particular music scene are not the only things
it picked up from the 1960s. Big Gigantic was not the only group to show its rock ‘n’ roll
influence. The second night, Gramatik took the stage accompanied by a guitarist, who continued
to shred out solos that could be compared to the music of Led Zeppelin or Pink Floyd.

When Bassnectar and Pretty Lights took the stage each night, you knew because you could
feel it. From the front row, you could feel heavy vibrations under your feet. Not only that, but it
seemed as though the bass controlled the rhythm of your beating heart.

Pretty Lights put on a solid show each night, showing why he is becoming a household name
in this genre of music. The visual production that accompanied Pretty Lights was filled with an
intense light show, and contained art in his backdrop that seemed to reflect a city tagged with
graffiti.

Pretty Lights’ music seemed more laid back than the other performers, but that did not stop
fans from going crazy. When Bassnectar came on stage, you could feel the anticipation in the
air. No way was he going to disappoint. After dropping songs like “Zed’s Dead” and “Pink
Elephants,” it was obvious why Bassnectar is the unspoken veteran of this genre.

Basslights was an enriching experience, as any good concert or festival is. Festivals like
Basslights offer a lot more than just music, though. These festivals bring people from all over the
nation together.

While at this festival, I met people from Pennsylvania, North Dakota, Minnesota and many
other places.