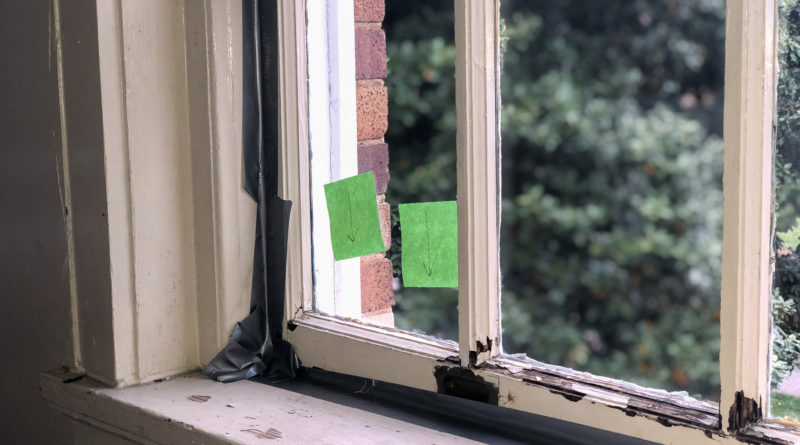 Residents in Carnegie Hall have expressed concerns about the excess amount of bees, wasps and other insects finding their way into rooms. The ongoing issues are being addressed by SGA, Residence Life, and physical plant staff, but so far have been unable to be fully resolved.

During the fall of 2020, Physical Plant began receiving work orders for specific and isolated areas that were experiencing wasps coming into rooms and disturbing the daily life for a few residents. As the semester progressed, the conditions worsened for some, as the insects began to seek shelter from the dropping fall temperatures.

“It became a problem almost immediately within moving in for the fall and has been a continual issue ever since,” said one anonymous Carnegie resident. “It’s definitely worse in the colder months when they come in for warmth, but even now when the nights get cold they’re coming in.”

Freshman Class President and Carnegie resident Emily Huffstetler had been contacted by a few fellow freshman residents and had seen discussion within a few GroupMe’s about the problems. She decided to send a survey to residents called “Carne-bees” in which 20 of 21 respondents reported issues with bees, wasps, or some other insect getting into their dorm.

Huffstetler used this data to bring the issue to the attention of Assistant Dean of Students Kristin Gourley, who, according to Huffstetler, “was quick to respond… and pass the [information] on to the right people.”

Physical plant has been trying to resolve the issues through many different means since last semester, recognizing that insect issues can be common across campus but are especially prevalent this year in Carnegie.

“It is unusual to have continuing issues as we have had with wasps in Carnegie,” said Physical Plant Director Reggie Dailey, “…a relatively mild winter likely has contributed to the issues this spring.”

The temporary work that has been done in Carnegie this year includes spraying in affected rooms and external locations on the building, inspecting above ceiling tiles, exterior caulking around windows, and interior taping of window openings. Over the winter break, extra spraying was conducted as the mild winter was expected to encourage the continuation of the issues.

This work, however, has not improved some residents’ situations. In some rooms with windows taped shut, air flow and room temperature conditions have become a secondary problem. In addition, some residents have severe allergies to insects that have taken up residence in their spaces. The aforementioned anonymous resident is allergic to yellow jackets, which were entering their suite frequently, particularly becoming a problem in the bathroom. When the issue was at its most severe, the resident was forced to travel 45 minutes home to shower to lower the risk of getting stung.

Residence Life sent an email to Carnegie residents on April 1 to provide information about what was being done and to offer alternative housing options for the remainder of the semester. One resident chose to move home in order to avoid the issues.

“I’m in the process of moving out now,” said sophomore resident Lainey Hudolin. “Our windows are sealed. If wasps are still getting in, it’s not from outside. It really freaks me out, knowing that they’re in the building somehow and nothing really seems to be changing.”

The change is supposedly coming, however.

“Sometimes a problem that would appear to have a simple and straightforward solution has a much more complex and challenging solution, this is particularly true for our older buildings,” Dailey said.

The insect issues are a consequence of the building’s structural issues. Carnegie’s roof has excessive openings due to deterioration of its wood by drainage and gutter issues. The gutter system of Carnegie frequently clogs and overflows, rotting the wood and creating these openings where insects are likely to nest—areas that can’t be reached by spraying.

However, this summer physical plant staff will work towards more permanent solutions by replacing the gutter system, replacing much of the roofing, and replacing or repairing windows that are contributing to the issue.

“This will be the largest building renovation project on campus since the Thaw Hall storm drain work several years ago…I believe our plans for this summer will improve the situation and will certainly be a major step in the process to insure the integrity of the exterior building systems of Carnegie,” Dailey said.

Staff and students share frustration during the ongoing difficulties. However, they also share hope that the issue will be resolved in the coming months, providing a safer living environment for the residents of Carnegie.