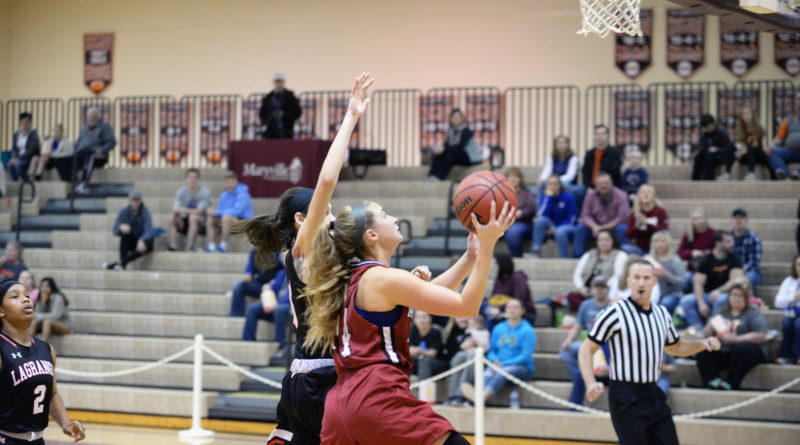 Coming off of a year that was geared toward constant improvement and growth, the Maryville College Women’s basketball team is focused on taking the next step this season–winning the USA South conference championship.

Maryville ended last season with a 13-14 record and a fourth place finish in the USA South Western Division. Ten year head coach Danny Travillian played four new starters. Seven out of the top eight players in his rotation were new and inexperienced. All of the turnover led to a roller coaster of a season.

“Last year, we had a lot of ups and downs,” Travillian said. “We would start to build some momentum, and then we’d lose two or three in a row. We got off to a slow start, and then we kind of put it together in conference and played a lot better.”

The season ended in the USA South Quarterfinals, as the number one seeded Averett University Monarchs defeated Maryville by a score of 68-65.

“We were knocking on the door,” Travillian said. “That’s kind of how the whole season went. We were right there, but we couldn’t quite get over the top to sustain success.”

Maryville has been picked to finish third in the conference this year in the USA South Coaches West Division poll. Travillian welcomes back four starters and a few talented freshmen.  Kelly Wandell (7.1 ppg and 7.4 rpg) and Libby Gardner (10.9 ppg and 3 apg) are the two senior leaders of the team. This team will go as far as these two lead them.

Shelby Hix (5.1 ppg) and Holland Jerrolds (2.0 rpg) will see an increase in their roles and playing time this season. Abi Joseph and Courtney Caruthers are going to help out a lot and provide a spark for the team in their first collegiate basketball season.

“We are still learning how to play with each other,” Eckenrod said. “We are determined to turn this season around. I’m excited about where we are heading, and I’m excited to see what this specific group does throughout the whole season.”

Every player has bought into the goal so far this year. They have made tremendous strides in individual improvements and accountability. Despite the difficulty of last season, the experience that the players received will help out a lot.

“I’ve got two years under my belt, so I know what to expect and how to react in certain situations,” Eckenrod said. “I want to channel that and lead my team into each game.”

Maryville is ready to take the leap and focus on winning games. The expectations are sky high, but the team has the potential, ability, and players to achieve them.

“This is a group that wants to make winning a banner a priority again,” Travillian said. “We want to get back to being that program that is chasing banners, rings, and conference titles.”