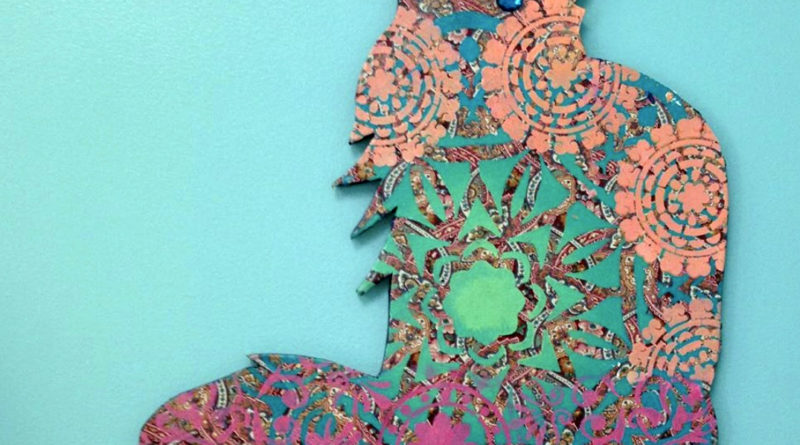 Maryville College’s Advanced Painting and Drawing class has just been confirmed to do another mural for the Blount County Animal Center.

In the Fine Arts department, Advanced Painting and Drawing is headed by professor Carl Gombert who instructs students in developing their own bodies of work, honing their expertise in their craft, and making their way into the professional art world.

This project to fill the state with public art has been active for nearly 15 years and features murals from students found across the city — from the Federal Courthouse in Knoxville, Union Grove Middle School, Farragut Presbyterian Church, Peninsula Hospital, Blount Memorial Hospital, and the Blount County Animal Hospital for two years in a row.

A close-up of the detail in one of MC’s public art pieces at Blount Memorial Hospital.

Gombert, who serves on the board of the Animal Center, facilitated the past and upcoming murals and art installations at the organization.

“I knew they were going to be redoing the building and doing some painting,” Gombert said. “We had been talking about some ways to spruce the place up … One thing led to another, and I proposed to them to get students to create the work.”

In previous years, Gombert’s class has designed the dog room and the cat room, which was finished just last semester. While the students create a cohesive, collaborative piece that the board eventually approves, the Animal Center provides the materials and finances needed to bring the students’ designs to life.

One of the mural pieces in the cat room of Blount County Animal Center.

The process is a complicated one. Students visit the center to take pictures and measurements of the desired space, jot ideas down in sketchbooks, and speak with both the Animals Center’s director and the Kennel Manager about what the facility is looking for. After this, the students must formally present three brainstormed ideas to propose.

“There is this idea that art is an inherently individualistic or solo enterprise, but a lot of contemporary art practice is collaborative,” Gombert said. “So, students in this assignment not only get to practice their presentation skills but also work on project management, coordinating work schedules, getting supplies … This is absolutely modeling professional practices.”

It is ultimately up to the students what will go up on the walls of the chosen space. While Gombert is there to advise, supervise and critique, the art students are free to incorporate their vision in the manner that they see fit. They design, paint and finalize on their own.

“Art is not unlike baseball where a 30% success rate puts you in the hall of fame — the answer is ‘no’ most of the time,” Gombert said. “Students are tasked with coming up with their own solutions, [which is] just the way a project goes for an artist in the wild.”

The next Advanced Painting & Drawing class will be held in the coming fall semester. Students of the course will create a mural for the benefit of the Blount County Animal Center for the third year in a row.