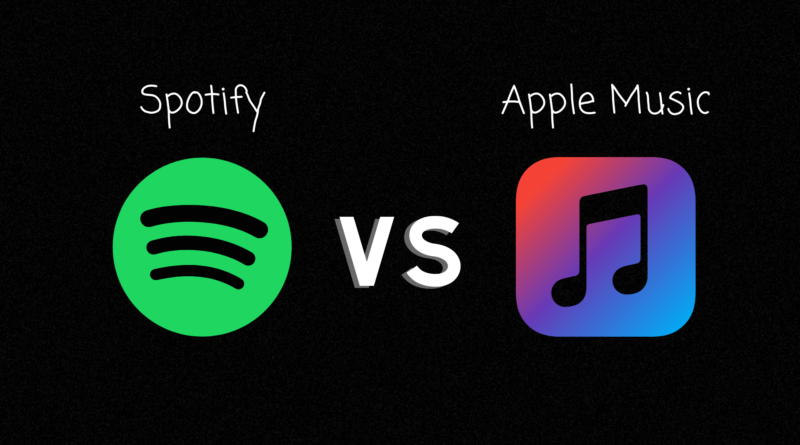 The infamous Gen Z debate: “What music streaming app do you use?”

“Apple music? Ew, you don’t get Spotify Wrapped! I can’t share the queue with you!”

“Spotify? They don’t even pay their artists! The sound quality is crap!”

Let’s dig into the nitty gritty of Spotify and Apple Music and their pros and cons. While these opinions are quite contradictory, each holds its own value.

An article on CNN Underscored argues that Spotify is overall the better streaming platform. It cites the user-friendly interface, ease of access to podcasts and music, and its popularity.

Spotify makes sharing music easy. Its  “Group Session” feature allows friends to listen to the same songs in real time, while its “Blend” feature blends friends’ top songs into one playlist. For those who prefer simplicity, collaborative playlists are also an option.

Apple Music does have SharePlay, but it only allows you to share music over a Facetime call with those you want to listen with—an experience limited to Apple users. With Spotify, you can share the music queue with any device, at any time.

Despite those pros, Spotify has recently faced criticism for underpaying their artists.

A Los Angeles Times article describes protests from April of 2021 about the rising profit of all music platforms, with a steadily decreasing payout for artists. There were complaints that artists don’t even get a penny per stream, but rather, between one-third to one-half of a penny, according to the article.

Protesters also called out the pattern of label-affiliated artists getting more favorable stream numbers, and thus, pay, because of a “rigged” algorithm. Spotify did not change their artists’ paygrade, while Apple said that they raised their pay to a penny per stream.

The biggest pro is probably that Apple Music has a larger music library. Apple Music also has extremely immersive sound quality, thanks to its “Spatial Audio” feature.

“Spatial Audio gives artists the opportunity to create immersive audio experiences for their fans with true multidimensional sound and clarity,” according to Apple. “Apple Music subscribers will also be able to listen to more than 75 million songs in Lossless Audio—the way the artists created them in the studio. These new features will be available for Apple Music subscribers starting next month at no additional cost.”

The way Apple Music features artists with articles, artwork and interviews on Apple Music Radio gives the listener much deeper insight on artists and their music.

Some cons include the fact that Apple Music is less popular than Spotify, with Spotify at 433 million active monthly listeners and Apple Music at 78 million. Apple Music also has a more complicated set-up.

Overall, both Apple Music and Spotify have unique features, and music lovers have to choose between them. Apple Music’s Spatial Audio, expansive music library, and insights into songs and their artists draw some into the fandom. Meanwhile, Spotify’s popularity and user-friendliness are the deciding factors for many music lovers. Which do you prefer?