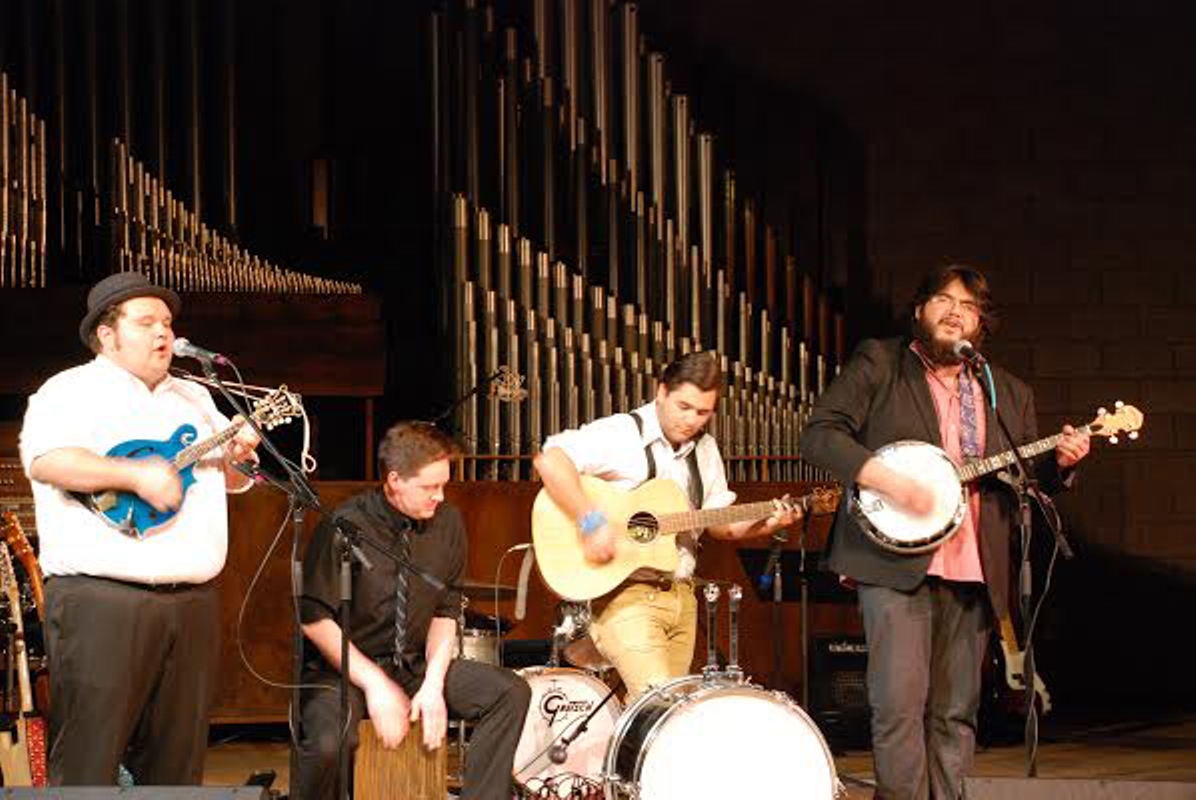 Adam Loo doesn’t write melodies. He writes entire arrangements, beefing up each song with thick harmonies, counter melodies, lyrical rap and moving choral parts interposed. After all, when your band consists of as many music students as Loo’s –a loose, Polyphonic Spree-ish sprawl of singing multi-instrumentalists, with a lineup that fluctuates between ballad style, folk, ska, rock and jazz—you’ve got to have a lot of voices to showcase compositions.

The recital had a turnout that filled the entire Harold and Jean Lambert Recital Hall on April 3. Loo has gathered a fan base for his compositions and various performances over the many years he has grown as a musician, performer and composer.

Cellist at the early age of three, Loo developed a love of music from his mother, a private violin instructor trained in Suzuki methods. Loo learned to play using the structured teaching model on a modified viola tuned an octave up from a real cello and an improvised an end pin to resemble a cello in appearance although later he moved on to play violin.

“I really loved playing both of those instruments, but by the time I was in middle school, I was interested in playing the bass,” Loo said.

During high school Loo picked up guitar and mandolin, although he ultimately found his niche playing guitar in the praise band at Maryville First Baptist.

At this point of Loo’s senior year at Maryville, he has amassed an arsenal of instruments and performance and composition experience in orchestra, bluegrass, jazz and various other genres and performance settings.

The recital opened with an uproar from the audience as Loo entered the spotlight with freshmen Kyle Rydell on guitar and Jack Townsend on Mandolin to accompany the four-string tenor banjo in “Fool”—a light-hearted folk-piece detailing the selfless endeavors of young love.

The first half of the program ended with the appropriately titled piano ballad “Please Don’t Go.” After a 10-minute intermission, the show continued on into an energized second half that included a country-western rock tune “Too Good to Be True” and ended with a choral arrangement of the Irish folk-tune “The Parting Glass.”

Loo’s compositions dealt with several aspects of the common human experience including romance, spirituality and general hardships marked with religious aspects embodied in the music, all pointing to God during times of helplessness. Things get hard. Plans and hearts get broken. Life changes. Do you hold your ground and risk losing everything, or roll with the punches and make the best of a bad situation?

Loo delivers his answer during songs such as “Chapters” and “Waters,” a slow-building anthem that also serves as a mission statement. “Who can stand against these waters, none of our fathers and none of our sons,” questions the chorus. He sings the first verse unaccompanied the first time, then gradually welcomes more band members into the fold as the piece builds intensity.

“My mission in my song writing is to strike a chord in people,” Loo said.“‘Waters,’ like all the pieces I compose, is a sound track to what I’m going through. Hopefully, my music can provide a voice for the struggles we all face as individuals.”

By the end of “Waters,” everyone is singing along, as though they’re adding extra emphasis to Loo’s point.

Loo is a fan of first impressions, and he prefers to showcase his music the old-fashioned way: with a melody, a beat and heartfelt lyrics. But he leaves some interpretation up to the listener.

“As a songwriter, I don’t like to just come out and say something,” Loo said. “For me, I can see God’s hand in many aspects of my life, but I want audiences to take what they need from it.”

Both Loo’s peers and audience members were said they were moved by the performance.

“Adam’s show blew my mind in all the right ways,” said Amber Vargas, a junior. “It was a wonderful night of talent.”

“It was great to work with Adam and perform such dynamic arrangements,” said senior and music major Seth Tinsley. “I wouldn’t be surprised if I had his music on the radio someday.”

Loo said thanks should go out to everyone involved in the show. He can be seen performing his arrangements next at Vienna Coffee House on May 3.