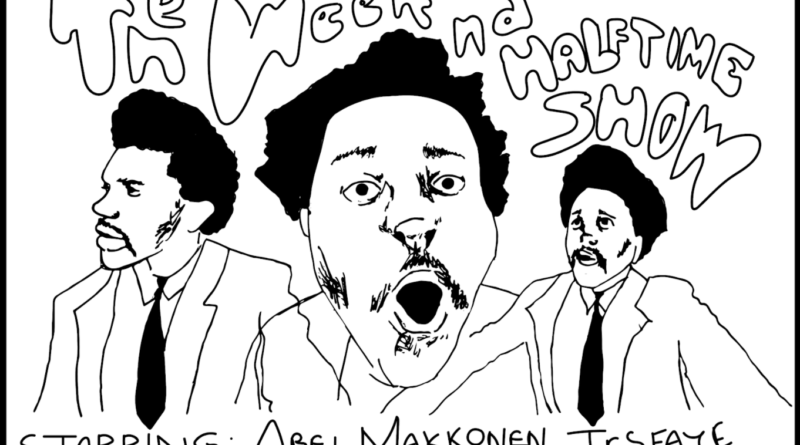 Blinding lights, bandaged dancers, and–what’s this? A hall of mirrors?! The Weeknd (stage-name for Canadian singer Abel Tesfaye) has become the center of conversation since the Pepsi Super Bowl LV Halftime Show, and many people can’t come to a consensus about his performance.

Some argue that the popstar is an artistic genius and that his show was full of hidden symbols of deep social commentary. Others simply think that The Weeknd’s performance was weak and confusing. Before we can discuss what happened at this year’s Super Bowl, let’s look at what led up to this moment.

In January 2020, The Weeknd released the music video for “Blinding Lights” on YouTube, in which his character recklessly drives a sports car through city streets. The video ends in a bloody car accident.

Later that spring, The Weeknd appeared on “Saturday Night Live” and other late-night talk shows with a bloodied bandage on his face. The “Too Late” music video premiered last October, and it features two characters post-facial reconstruction surgery, who come upon the Weeknd’s severed head while driving. The two women bring the decapitated head home, and the video gets more violent and absurd from there.

This January, in his “Save Your Tears” video, The Weeknd takes the stage wearing a face disfigured by appalling prosthetics (meant to mimic plastic surgery). In fact, most of the music videos from the “After Hours” album contain disturbing images and center around the singer himself, donned in a red jacket and acting within a macabre narrative. At this point in The Weeknd’s career, fans are accustomed to, and appreciate, the shock of this artistic style.

All of this brings us to Feb. 7, 2021. In his op-ed in the Chicago Tribune, Alvaro Jarrin interprets the recurring images of bodily mutation and reckless impulsivity in The Weeknd’s work as symbols of the destructive nature of fame. Jarrin writes that The Weeknd has been making subtle statements about his loss of privacy (thus requiring him to hide his true identity) and fans’ desire to consume celebrities. Depending on whether or not you agree with this analysis, it may add context to the absurdity of the Super Bowl Halftime show.

The opening number began with The Weeknd sitting in a fake convertible car (reminiscent of the “Blinding Lights” video). About four minutes into the performance, the singer struts into a hall of lights and mirrors, stumbling and staggering about with artificial confusion. It was as captivating as it was unsettling. And yet, impressive. Synchronized dancers with faces covered completely in, that’s right, more bandages, joined The Weeknd for the show’s final minutes.

Could this be an attempt to spread a message about the disorientation and pain caused by fame? Were the facial bandages simply a clever way to incorporate mask-wearing into the performance? The public is divided concerning the show as a whole, primarily along age-lines with younger audiences approving more than older.

Whether you found the performance inspiring, or unsatisfying, incredible or frightening, The Weeknd gave the nation something to talk about and explore. For that at least we should recognize his creative and performative abilities.